Lukáš Gajdos obtained his PhD degree in Structural biology at the University Grenoble Alpes and the Institut Laue-Langevin in Grenoble under the supervision of Dr. Anne Imberty from the Centre de Recherches sur les Macromolécules Végétales (CERMAV, CNRS). The main topic of his research was structural studies of lectins that are involved in bacterial infection using neutron macromolecular crystallography (NMX).

Lectins are carbohydrate-binding proteins whose diverse functions are implicated in many physiological and pathological processes. Every human cell is covered by a thick layer of glycans in the form of glycoproteins and glycolipids. Lectins can read this complex “glycocode” by specifically targeting different sugars and mediating molecular recognition [1]. Pathogenic bacteria produce lectins that can be directly involved in cell adhesion in early stages of infection. Since increasing antibiotic resistance is a major health problem, preventing bacteria to bind to human cells is the basis of antiadhesive therapy, which is beneficial since it avoids killing bacteria and promoting resistance. The detailed knowledge about lectin-glycan interactions involved in host-pathogen associations is required for the design of novel high-affinity glycomimetic compounds [2].

He used NMX to provide details on the positions of hydrogen atoms, protonation states of amino acid residues, as well as directionality of water molecules that play a crucial role in sugar-binding by lectins [3]. Perdeuteration, where all hydrogen atoms are replaced by deuterium atoms, enhances their visibility in the neutron maps. While perdeuteration of proteins is well established, this is not the case for carbohydrate molecules. Here, he used for the first time, an in vivo perdeuteration of a monosaccharide, L-fucose, using a glyco-engineered strain of Escherichia coli [4].

His work was focused on fucose-specific lectins from an insect pathogen Photorhabdus luminescens [5] and from a human pathogen Pseudomonas aeruginosa [6]. P. aeruginosa is a human opportunistic pathogen that can cause fatal infection in immunocompromised or cystic fibrosis patients. Pseudomonas produce many virulence factors including lectins that are involved in the initial stages of the infection. One of them, called LecB, is currently viewed as a potential drug target for glycomimetic compounds.

During his thesis, he was able to crystallize perdeuterated lectins with the perdeuterated ligand and solve three neutron structures. The neutron diffraction experiments of PLL lectin from P. luminescens yielded two structures, one in the ligand-free form and one in the complex with perdeuterated fucose [7]. The results highlighted the advantages of using perdeuterated molecules in NMX research as well as the use of room temperature for the data collection that avoided artefacts caused during cryo-protection and cryo-cooling of protein crystals. He could describe a complete hydrogen-bonding network between the lectin and sugar, including fine details on hydrophobic contacts (Figure 1). 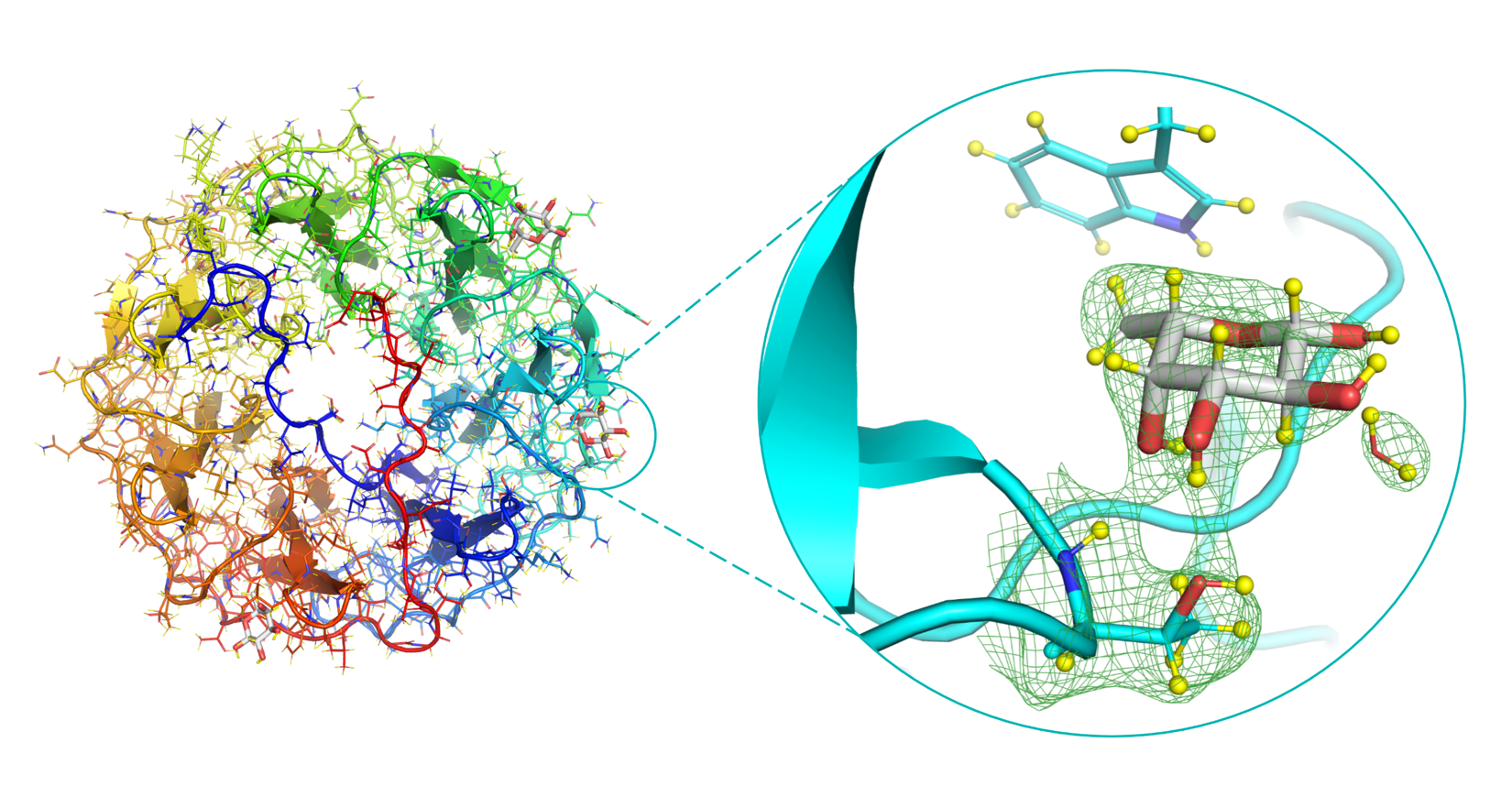 In the neutron structure of the LecB/fucose complex, he could observe that all of the charged amino acid residues involved in the calcium coordination were non-protonated (Figure 2).

Interestingly, he also observed a low-barrier hydrogen bond, a special type of strong hydrogen bond between one of the fucose hydroxyl groups and the protein [8]. Moreover, orientation of water molecules involved in the interaction could be discerned resulting in a higher mobilty than previously thought based on the X-ray structures.

Neutrons played an important role in his research as all of these details could not be revealed using X-ray crystallography alone. He hope that the new structural data may help in the design of new potent glycomimetic compounds for fighting antibiotic-resistant bacteria.