Hydrated crystal structures, i.e. crystal forms containing water as an integral part of the crystal lattice, are inherently difficult materials to work with in the pharmaceutical sciences. We thus need to know about the existence of hydrates as soon as possible in the development of a new drug to address solubility and stability issues during the formulation stage. To gain this information, current state-of-the-art is the serendipity-driven crystallisation screening, in some cases with the help of crystal structure prediction. In this talk, Katharina will present an alternative approach to thinking about hydrates, how and when they crystallise, and which technologies that are available to fundamentally understand the interaction between drugs and water.

Biography
Kathi Edkins is Reader in Pharmaceutics at the University of Manchester where her research group focuses on pharmaceutical disordered materials ranging from glasses to gels with a special focus on the solution state before crystallisation. Being a pharmacist by training, Kathi studied the pharmaceutical solid state for her PhD in Innsbruck, Austria, before moving to Durham, UK, for a postdoc in crystallography. After a short stint as service crystallographer in Wuerzburg, Germany, Kathi’s academic career started as Lecturer at the newly formed Division of Pharmacy at Durham University in 2014 before moving to the School of Pharmacy at Queen’s University Belfast in 2017. She is in Manchester since 2020. She has a keen interest in using neutron scattering in the pharmaceutical field, and her research in this field was honoured by the BTM Willis Prize in 2016. She has published over 55 scientific research papers and held numerous invited talks at conferences and seminars. Currently, Kathi is serving as secretary to the SIG13 on Chemical Crystallography and Molecular Structure. 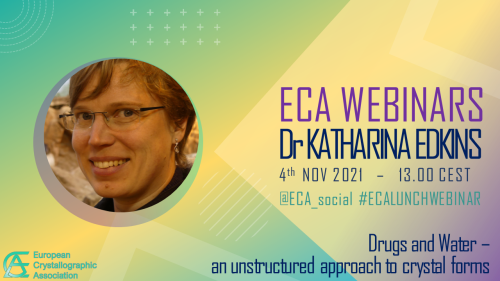